So many people I’ve talked to during and after this process say something along the lines of: “I know I’d give a kidney to my own child/spouse/sibling but I don’t know if I could do it for a stranger.” I never really thought of it this way, maybe because I hadn’t considered being a living donor until I read about my recipient Jonathan. I immediately felt that this person was as deserving at a new lease on life as anyone I was related to. Because we don’t have a history of kidney disease on either side of our family, the likelihood that our own kids would need one of mine and that I would be a good match at that time was statistically improbable. It felt selfish to hoard my kidney on the off-chance that someone I was related to might need it in the far-off future.

In many ways, I think donating to a stranger was easier. Throughout the process, at every single appointment, someone from the transplant clinic asks: “are you sure you want to continue?” They explain that they will come up with some medical reason to offer the recipient, and that you will be off the hook (they will also do this for related donations). At my appointments with the social worker and psychologist we didn’t have a lot to discuss because they typically spend a lot of time trying to figure out if family members or friends are putting pressure on you to donate. I had stumbled on this idea all on my own, and only told my husband and one sister for months until we had settled on a surgery date. I think it would be very different if you weren’t comfortable with the idea of organ donation and then all of a sudden found out you were a match for a relative and everyone around you knew it.

The downside to donating to a stranger was that I didn’t have a direct way of letting him know I was out there and wasn’t having second thoughts. This was in part due to the fact that I wanted to remain anonymous until the surgery. I did reach out to Jonathan a couple of weeks before the surgery and sent him a short note through our coordinators to let him know I was getting rested and prepared, and that he didn’t need to worry that I was going to back out. It was also challenging immediately afterward when I was feeling a little tired, beaten up and hoping it had all been worth it. I did break down on Day 5 post-op and reach out to him via Facebook messenger to find out how he was doing. Exchanging a few brief messages and learning he was up and about and even getting released from the hospital a little early made it one of the most rewarding days of my life.

During the first few days of recovery, I felt very protective toward Jonathan. I was tired, sore and wanted some guarantee that I had secured a healthy future for him. I would think: I hope he always wears a seat belt, doesn’t speed, is careful crossing the street, etc. As the days wore on and I felt better I let go of those thoughts and like any gift it is no longer mine, it’s all his to do with as he likes. The social worker asked how I would feel if I met him and learned he wasn’t taking care of himself. I guess that’s a possibility, but after learning more about him, he knows acutely what it feels like to not not feel well, and he probably values his health more than the average 30 year old.

As of yesterday, Jonathan and I are no longer strangers! We met for the first time at the hospital with our families and were surprised to learn that many of the doctors, surgeons and nurses would join us along with the local news. It was very emotional for me to meet him and his fiancee and see first-hand that things were going to be okay. The kidney is functioning well, he has returned his dialysis equipment and is in the process of fine-tuning his anti-rejection meds. His fiancee returned to work this week and Jonathan will be back at his job later this fall. I look forward to meeting up with them again soon in a less-pressured environment. And we finally became Facebook friends as I do have a fairly strict rule that I only “friend” people I’ve met in person, even if I have given them a kidney 🙂 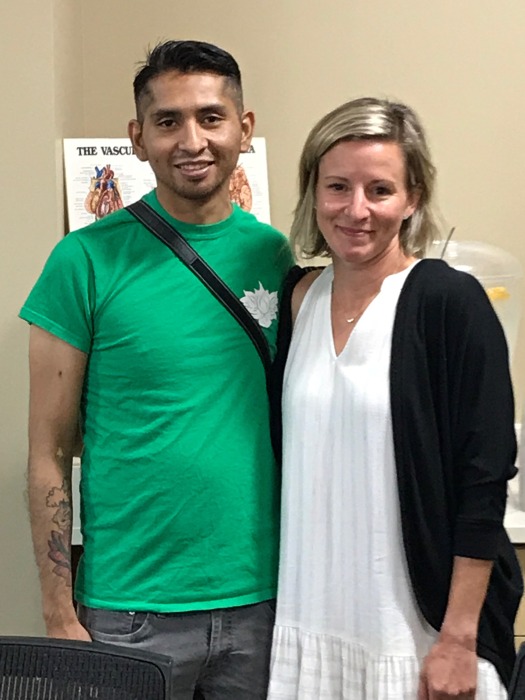